The Ojibway, Pottawatomi and Ottawa are the three tribes who live here. Although the Pottawatomi settled permanently at Walpole Island only after 1836, they had used the territory of southwestern Ontario at a much earlier date. Having a common heritage they formed the Three Fires Confederacy - a political and cultural compact that has served us well. The Island is blessed with a unique ecosystem including 6,900 hectares of the most diverse wetlands in all of the Great Lakes Basin. Actually, Walpole Island consists of six islands with Walpole being the largest. The land portion of the reserve contains a total of 58,000 acres. I use the term reserve lightly because in fact Walpole Island has never been founded, legislation, established, set apart or surveyed as a reserve.

Walpole Island has the distinction of being unceded territory. This fact, together with its natural and human resources, makes Walpole Island a very special place. Walpole Island is also known for its rare flora and fauna. Our local economy is highly diverse and rich. It is dependent on the bounty of the land and its fruits. Our lands and waters still support recreation and tourism. Hunting, fishing, and trapping is a multi-million dollar industry in our community. Even though we are the southernmost reserve in Canada citizens of our First Nation, incredibly can still support their families through hunting, fishing, trapping and guiding activities. These traditional activities are central to our economic base and cultural integrity.

During the war of 1812, the majority of the Nation’s inhabitants offered their services to the British Government. These native troops played an important role in several battles and played a crucial role in defending what is now known as Canada. In 1840’s, the U.S. began to relocate many bands to “Indian Territory”. A large amount of Chippewas, Pottawatomi and Odawa who had sided with the British decided to migrate across the border to avoid being caught up in the relocation by the United States. These disposed native people were eventually taken in, allowed to stay on reserves in Southern Ontario. Many traveled up and settled on the east and North shores of lake Huron, but many settled on the Sarnia Reserve.

The community of Aamjiwnaang First Nation, formally Chippewas of Sarnia, is located on the St. Clair River, is 5 kilometers south of the southern tip of Lake Huron.

On January 1st, 2000, we greeted the New Year by officially reclaiming our name Aamjiwnaang (pronounced am-JIN-nun), which means “meeting place by the rapid water”, which describes our surrounding community. 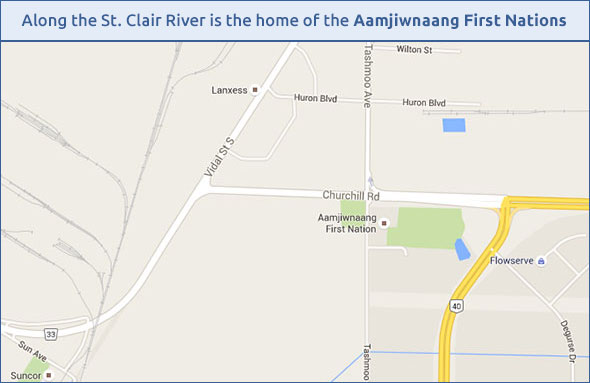 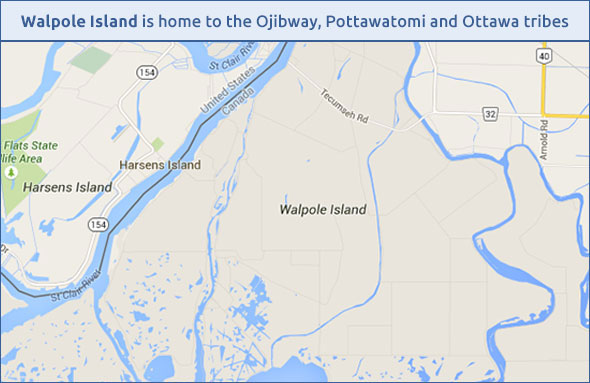